I have heard about your faith

The National Committee for England, Wales and Northern Ireland, consists of one representative from each of the participating denominations, each chosen by their denomination to represent it on WDP.

These representatives are appointed for a term of nine years, reviewable every three.

If during that time a member is elected to become a Trustee, her denominational status ends and the denomination will be requested to appoint somebody else to represent it. The newly appointed Trustee will serve a further two years as Vice-chairperson, two years as Chairperson and two years as President. (Effective from 2018 in accordance with the revised constitution. During this period of transition, the current Chairperson will remain in post longer than the two years.)

We are a working committee of volunteers and all members are expected to take a full part in the year-round activities. 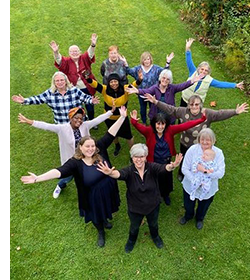 What the National Committee does

The members of the National Committee in England, Wales and Northern Ireland meet in January, March, May and September for their ordinary committee meetings.

In November, they attend a four day residential meeting. During this time, materials received from the country preparing the service in 15 months time, are discussed and edited.

After the four days most of the material is still at draft stage. Over the following weeks the material is worked upon resulting in the order of service, background, bible study and the children’s leaflet, together with a teachers’ guide, which are then printed ready for the Link Day, which is held in London in July.

At the Link Day, preparation day organisers from all over the UK are informed about the country that has prepared the service for the following March, given a taste of the service and led in a study of the scripture passages.

Preparation days are organised in order to inform local WDP groups about the country that has prepared the service and the materials available. Materials are available to purchase. Some materials are free of charge.

These days take place from September until early February. Most of the meetings are held in October and November. Members of the national committee attend most of these meetings.

The National Committee of the WDP also has links round the world, with other committees of the WDP. Frequently we are asked to pray for the situations in various countries.

All members of the committee work on a voluntary basis and only claim expenses.

The first Women’s World Day of Prayer service in Wales was held in 1933 at Trinity Church, Swansea. In March 2008, at the University Hall, Lampeter, a national service to celebrate seventy-five years of the movement in Wales was organized by the Welsh Committee. Extracts from the services from 1938 to 2008 were chosen as the pattern for the service, starting with the service created by New Zealand in 1938. There was a Welsh atmosphere to the celebration, with parties from all over Wales singing various forms of Welsh music. Also present were officials of the National Committee for England, Wales and Northern Ireland, as well as representatives of the English churches in Wales.

Following a visit to our Annual Committee in May 2016 by National Committee Officials, we became a Welsh Sub-Committee.

WHAT DOES THE WELSH SUB-COMMITTEE DO:

The Welsh Sub-Committee is made up of members from north Wales and south Wales, representing the following denominations: The Presbyterians, The Independents, The Baptists, The Methodist Church, The Church in Wales and the Catholic Church. Members of the Sub-Committee meet twice annually, in May and September. The sub-committee’s work is to translate the English-language service and various items into Welsh and publish them. In a typical year approximately 5,500 Welsh leaflets and English literature such as ‘Together in Prayer’ are distributed to around 200 branches where Welsh or bilingual services are held.

All of the Welsh Sub-Committee’s work is conducted through the medium of Welsh. All records and any correspondence are in Welsh. The work is done on a voluntary basis. Whatever we do, in word or deed, we do everything in the name of the Lord Jesus, giving thanks to God, the Father, through him.

On 12 May 2018 we celebrated 75 years of Women’s World Day of Prayer in Northern Ireland in the Assembly Buildings in Belfast and our guest speaker was the Reverend Dr Heather Morris.

THE WORK OF THE NI EXECUTIVE COMMITTEE

The committee is made up of members from all parts of the province, representing the following denominations: The Presbyterians, The Methodist Church, The Church of Ireland, The Roman Catholic Church and The Salvation Army.

The committee meets three times a year and organizes Two Preparation Days in the autumn (October/November) which are designed to give as much support and information as possible to all the NI branches in order to facilitate their preparation for their services in the first week of March. Usually one Preparation Day is held in the centre of Belfast and the other has been held in various locations in the more Westerly parts of the province, e.g. Omagh and more recently Dungannon. Since the onset of COVID-19 in 2020 we have introduced a Zoom Preparation Day, the first of which was held in November of 2021 and which was very well received. We plan to use the Zoom platform again this autumn as we feel it will open up more opportunities for attendance to those branches situated in more remote parts of NI.

We thank God that we have the privilege of sharing in this precious gift of Women’s World Day of Prayer and we pray that it will continue to bind women together throughout the world in the love of Christ.

Gwen Wildman is the new representative for the Welsh Speaking Churches on the WDP National Committee. A retired nurse, she is currently secretary of the Presbyterian Church of Wales in Sutton, is an active Street Pastor in Merton and volunteers with Christian CARE Merton, a charity befriending disadvantaged families and migrants. Gwen likes nothing more than retreating to the green, green grass of home for the annual Ministry of Healing Conference, in Cefn Lea, Newtown.

Louise Bowes represents Northern Ireland on the WDP National Committee. She works for the Health Service and is a Street Pastor in the Borough of Antrim and Newtownabbey. Louise is an Ordained Local Minister in the Church of Ireland, serving in Church of the Holy Spirit, Mossley.

Joint Council of Churches for All Nations

Joint Council of Churches for All Nations

Pastor Dr Audrey Eccleston represents the Joint Council of Churches for all Nations on the WDP National Committee. She is currently a widow and serves under the leadership of Bishop Dr Esme Beswick MBE, at Nebaioth Prophetic Church, at St Michael?s, Stockwell, Lambeth, since 2013. Audrey is a retired Science teacher, author of the book Praise, Worship and Thanksgiving, published by iUniverse and is an active member of Churches Together in Stockwell and Brixton.

Rhianydd is the current representative for the Church of England on the WDP National Committee. She has recently completed her doctorate in medieval liturgical music at both Bangor University, Wales and Charles University, Prague.