On the other side of the world in the South Pacific, 2000 miles east of Australia, lies an archipelago of 80 islands called Vanuatu.

There are no large mammals, poisonous snakes or poisonous spiders. The climate is temperate and the soil fruitful, but this region is prone to natural disasters including earthquakes, volcanic eruptions and many destructive cyclones in the hot and humid season from November to March.

To the Ni-Vanuatu, the people of Vanuatu, land is very important. It is not viewed as a thing to be owned, but as vital to the existence of humans as a mother is to a child. The traditional Vanuatu family took care of each other and was self-sustaining, and respect was shown for the environment. Modern technology is changing life – although the internet is scarcely available in the outer islands, mobile phones are almost universal. But the islands, which vary greatly in songs, dances and customs, are proud of their cultural identity. 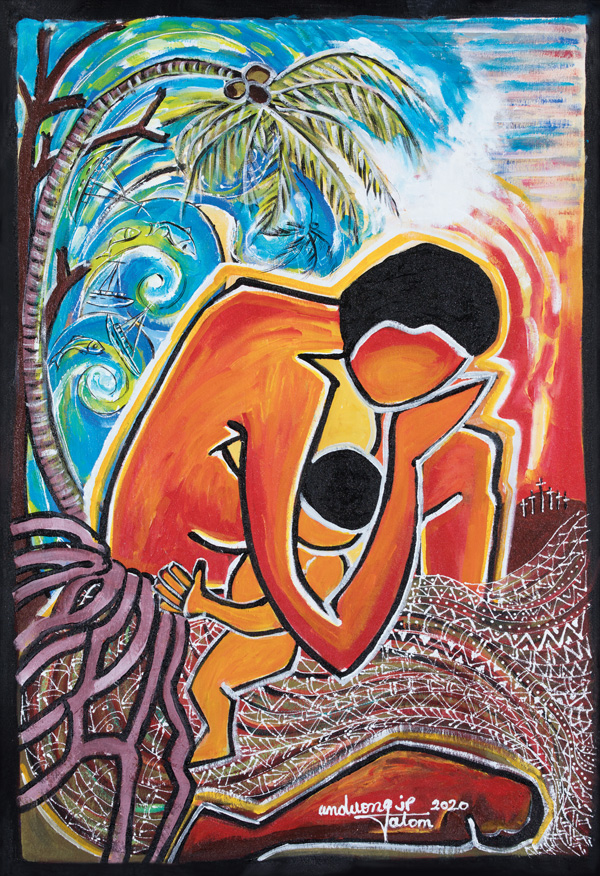 In 1606 Spanish explorers named the largest island Espiritu Santo. In 1774 Captain James Cook renamed the Islands the New Hebrides. In the 1800s came the traders, followed by ‘blackbirders’ who kidnapped, tricked or coerced South Pacific islanders into working on the cotton and sugar plantations in Queensland, Fiji and Hawaii.

In 1906, France and the United Kingdom, having both claimed parts of the archipelago, agreed to jointly manage it as the Anglo-French condominium of New Hebrides. The natives found themselves stateless, – neither French nor British nor New Hebrideans and with no land rights. They remained stateless until 1980, when the Republic of Vanuatu was founded as a parliamentary democracy. Vanuatu means ‘country that stands up’, and the motto adopted was ‘In God we stand.’

The national ceremonial dish is lap-lap – a pudding made of grated root crops or plantain.
The preparation and drinking of kava is an integral part of ceremonial occasions, when pigs are exchanged and eaten.

The coconut tree is viewed as the tree of life because all its parts are useful. The demand for cash crops has now limited the amount of land available for traditional food.

The people of Vanuatu are mostly Melanesian, with a Polynesian minority. The population is around 300,000 of whom nearly a fifth live in Port Vila,
the largest city.

113 languages and numerous dialects were spoken until recently – more languages than anywhere else in the world. Bislama, which is widely spoken, French and English are the official languages.

Education is not compulsory or free. Most families can only afford to educate their firstborn child, and boys get priority. However, in the past 20 years there have been changes and the gender gap in literacy and education has narrowed.

Health of women and children are key national priorities of the government.

Malnutrition is a growing problem, accounting for most of the deaths in children under 5. Malnutrition has been aggravated by the introduction of processed, western foods.

Violence, physical and/or sexual, affect approximately 60% of women and girls.

Safe drinking water and adequate sanitation facilities are major concerns. In rural areas people may have to walk up to an hour to find water.

Adopted in 1980, the lower portion is green to represent the richness of the islands, whilst the upper part is red symbolising the blood of wild boars and men. The black triangle is for the Ni-Vanuatu people. The Y-shape is yellow and represents the light of the gospel shining through the Y-shaped archipelago which makes up the country. The emblem is a boar’s tusk representing prosperity; inside the curve are crossed leaves of the namele tree signifying peace.

The government is the largest employer. Vanuatu’s economic growth is based on tourism, construction and offshore financial services but the proceeds from foreign-owned big hotels and resorts primarily leave the country. The current system has led to a huge gap between the haves and the have-nots.

Young people are migrating to the towns of Luganville and Port Vila hoping for jobs that are non-existent, so therefore may find themselves without enough food, water or proper housing.

Women represent 40% of the labour force but are rarely in leadership positions. Opportunities for women to set up businesses are limited as they lack access to capital, financial services and markets. The Constitution supports gender equality but there is no political will to implement it.

Originally, each island had its own gods, customs and culture. The Vanuatu people did not worship animals or plants but believed there was a creator somewhere in the heavens.

Christianity and colonisation had a significant impact on island society. Formerly, throughout the archipelago, chiefs were the custodians of the land, language and heritage, and determined the norms of the societies under their jurisdictions. In the Farea (village meeting house) issues were debated and although men were generally the decision makers, women had ways to bring their concerns.

Christianity changed a decentralised system of life in the villages to a centralised form of governance, and the role of women in decision-making was much reduced. Missionaries opposed cannibalism and regarded local religion as witchcraft. Currently 83% of the population is Christian.