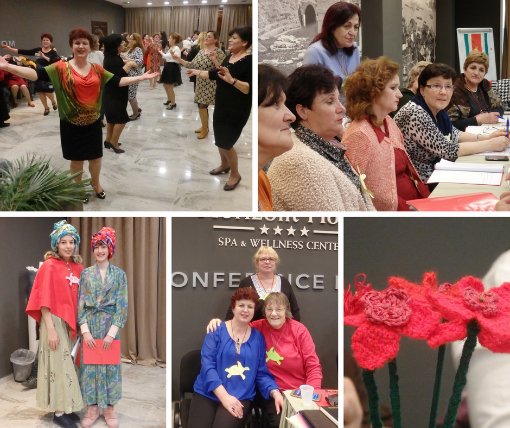 Elizabeth (Burroughs) and I arrived at the Mother Teresa Airport in Tirana on a dark wet evening to be met and welcomed by Marita and a very helpful taxi driver who gave us a tour of the city before we arrived at Marita’s home.

The wet weather continued as we joined the bus the following morning to Durres where the workshop was to be held. As women arrived they greeted us and each other, language was not an issue as a smile is universal. It was only thirty miles to Durres but what a journey. One woman shared chocolates, another eclairs these people have little but share everything. On the way we sang religious songs.

Elizabeth opened the workshop with a brief history of World Day of Prayer and we distributed the wallets, pens and brooches which were immediately fastened onto their neck chains. This workshop enables women to meet and plan the March service. Marita has worked hard to achieve this outreach vision – originally Albanian men were reluctant to allow their wives to attend this workshop – dismissing it as a disco and a ‘jolly’.

There is much discussion in Albania about communist rule and democracy which followed in 1994. Before democracy people had to move out of the cities and Marita talked about the joy of moving back to Tirana which she had always considered home. Many of the women still live out in the villages, however the railway no longer exists in Albania for public use so public transport is difficult and unemployment is high. The freedom to attend Christian worship is valued and churches are increasing.

After the bible study I asked the women to make their personal pledge for the environment. All forty women contributed to the discussion and their ‘post its’ were displayed at the front. Later the women worked in groups creating flowers, turtles and flags. This was an inspirational experience: they worked hard on tasks with little conversation and impressive results. Saturday evening was a social occasion involving Christian prayer, fellowship and dancing. I taught them the circle dance ‘Bells of Norwich’, which they danced beautifully. Much dancing followed including dances from the north of Albania, as well as south. They have much to teach us about all age participation. Young people are nurtured and participate joyfully, their English language expertise proved very useful. Women talked about going home to poor electricity, no sanitation or water supply but treasuring these few days of luxury, which allowed spiritual reflection and fellowship. Sunday was spent going through the service in preparation for March. All the crafts were used and displayed and the array of material and artefacts for the service was excellent. Resources were shared so that they could return to their churches and use them for the March service. The National Committee for England, Wales & Northern Ireland were thanked for our financial and spiritual support and Elizabeth closed the event in prayer.

Elizabeth and I were overwhelmed by the hospitality, welcome and kindness from Marita and Leta. We had met as strangers and departed as friends.