Rise! Take Your Mat and Walk

As women in Suriname, we believe that the Christian faith community can make a great contribution to the preservation of a living, healthy and safe environment. The future of the earth for the next generations matters to us. We see this as one of the key elements of the Christian faith. It reminds us of the relationship between God and creation, and God and humanity.

Suriname, like many countries, feels the effect of worldwide climate change: drought, hurricane, and storm, due to global warming. Along the Suriname coastal strip it now oods in the rainy season, including Paramaribo the capital city. Other environmental changes have been caused by human activity, like the damage to the local rivers through gold mining and mercury pollution. In the 21st century/24-hour economy, which is striving for good economic outcomes and excellent returns, Christians need to balance God’s Creation with man’s creations. We need to be guided by the theme “All God’s Creation is very good!” 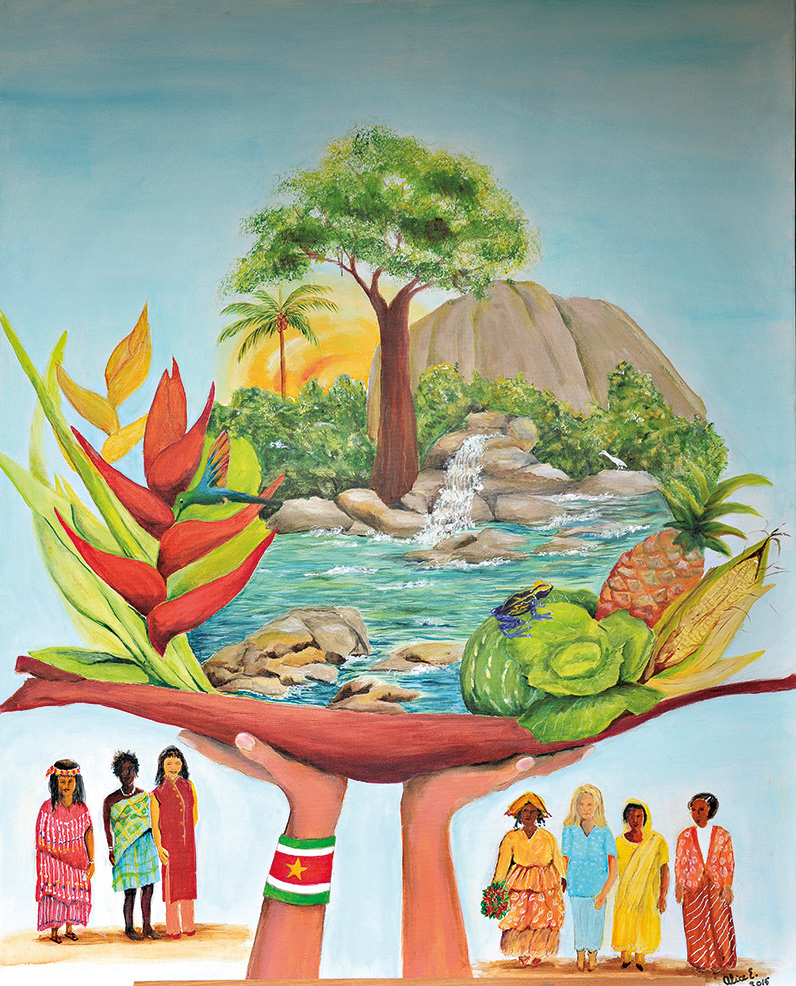 Named after Surinen tribe. Suriname is part of the Guianas, meaning “land of many waters”.

15% of land is coastal and less than two metres above sea level. At risk because of climate change and rising sea waters.

Average temperature during the day is 27.1o C. January is the coldest month (averaging 26.1oC), and the hottest month is October (averaging 28.3oC).

Country of beauty and high biodiversity. 715 species of birds, many orchids, over 60 species of lobster claw ower, the blue frog and the giant sea turtle.

Laws passed to ensure protection
of the environment.15% of land surface protected territory. Largest nature reserve is on UNESCO’s list of Heritage Sites.

The situation of women and children

In March 1993, the Suriname government rati ed the United Nations Convention on the Elimination of all forms of Discrimination against Women.

Although the interests of the child are protected by the government and UN, there are still violations of their rights.

Agriculture and export of sh. Gold and crude oil are the greatest sources for foreign currency. Extraction of water from subterranean water sources, for global shortage.

In 1995, World Bank classi ed Suriname as the seventeenth richest country in the world for its natural resources.